There are few of the Les Mills tribe who don’t recognize the friendly face of Amir Behforooz. After transforming his own life with Les Mills, he has dedicated himself to transforming the lives of others as a trainer and this week, took on his ultimate role as a presenter on BODYPUMP™ 94. He talks about his experience during filming week. 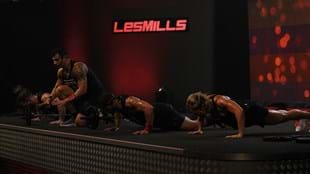 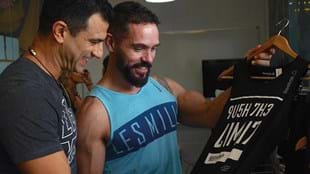 Presenting the Masterclass for BODYPUMP™ 94 is a role Amir Behforooz was well-prepared for.

The Dubai trainer and group fitness manager started his fitness career with Les Mills more than eight years ago and is so dedicated he has flown from Dubai to Auckland to attend Masterclass filming 17 times.

After being told he would be presenting BODYPUMP™ 94, he spent the last two filming rounds in Auckland following the same training and rehearsal schedule he knew lay ahead of him during filming week, to prepare himself mentally and physically.

Being super fit was certainly a requirement to present the latest release – with a huge 1076 reps (instead of the usual 800 in BODYPUMP™), Amir says doing the class for the first time was a huge shock to his body.

“They prepared us so well throughout the week that I wasn’t really nervous when I got on stage.”

He says presenting alongside his self-proclaimed hero Glen Ostergaard and training superstars Kylie Gates, Dave Kyle and Claudio Falletta was a big honour.

“Glen has been coaching me for the last five years so to reach this moment was awesome.”

Amir says he’ll be taking plenty of learnings from his presenting experience home to share with his classes and fellow instructors at the Aviation Club in Dubai, as well as the thousands of fans that follow him on social media every day.

“My focus is now on people and bringing other instructors to the same level.”

He says the opportunity to be part of a Les Mills filming has been a humbling one.

“Everyone wants to be on the stage, but I personally think we’re doing nothing special. Everything is prepared by the LMI team and we just present a couple of tracks. All we’re doing are choosing to be the flags of Les Mills.”

Check out photos of BODYPUMP™ Masterclass filming on our Facebook page.