GETTING HIGH-INTENSITY ON MUSCLE BEACH

LES MILLS GRIT™ hit LA in a big way over the weekend with the filming of three new quarterly workouts at Venice Beach, followed by the IDEA Summer Games, powered by LES MILLS GRIT™. Read on for highlights of the weekend and pics. 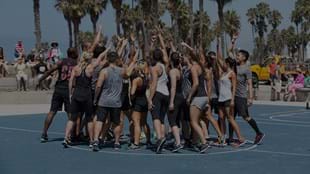 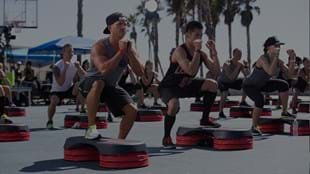 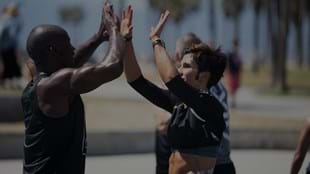 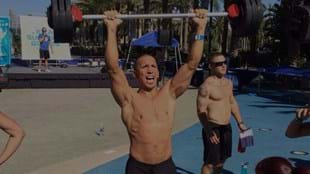 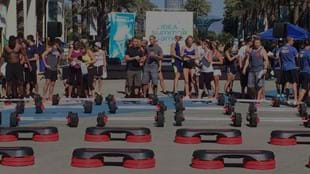 LES MILLS GRIT™ presenter Sheldon McBee, who took the Venice crowd through their workout said the event was the best filming experience he’s been involved in yet.

“It was so cool and unique to be in the United States filming, to be in Los Angeles, and to cap it off right on the blacktop on Venice Beach!”

Sheldon says the commitment to take all three workouts to the next level was a very collaborative team effort between himself and fellow presenters Jeremiah Evans, Nikki Schultz and Roman Truttman.

“We didn’t do it as individuals. All four of us sat down and did it together which was something I’ve never experienced filming in the past and made the filming day a completely epic experience.

Outside of actually creating the workout itself we created the entire journey as a team and made what I fell was the smartest and most inspirational release to date.”

Instead of taking a hard-earned rest after their gruelling filming days, Sheldon and co-presenter Jeremiah Evans headed straight to host the IDEA Summer Games, which was powered this year by LES MILLS GRIT™.

The sight of 350 fans going hard, competing for top spot as LES MILLS GRIT™ champion got the crowds pumped and Sheldon says there was an unprecedented level of interest in the program from fans eager to get LES MILLS GRIT™ in their home towns.

“The buzz was positive, supportive, competitive, the word “GRIT” was flying around like no one’s business.”

Check out the full range of pics from filming at Venice Beach and the IDEA Summer games on Facebook or find a workout near you.