How picking the right seat can change your life

If you are constantly feeling sluggish and tired, it may feel impossible to motivate yourself to exercise. If your energy is low and the idea of getting moving seems too hard, take a (bike) seat and read on… 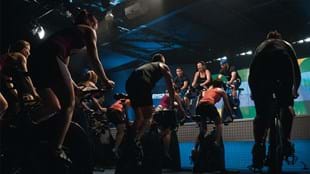 The truth is you can make significant improvement to your fitness in a short space of time. The really good news is that you don’t need a complicated and highly technical routine.

All it may take is swapping one seat (the armchair) for a slightly different seat. That’s how Philip Holland turned his life around. He used an indoor cycling class to dramatically improve his cardio endurance.

Philip had a health scare that saw him in hospital with arm and chest pain. This prompted a warning from his doctor about his sedentary lifestyle. Philip was told it was time to make some changes, fast. Joining the gym was an easy decision but his doctor wanted to see some rapid improvement. He was advised to try group fitness in an effort to gain faster results.

Sitting down for his first RPM™ class Philip felt apprehensive. Weighing in at 123 kilograms (19.5 stone), he was daunted by the idea of a strenuous group fitness session, but knew he had to give it a try.

If you had told Philip that six months later he would have lost more than 28 kilograms (4.5 stone) he would not believe it. Not only had he lost significant weight, he felt great and his fitness levels were vastly improved. From a tentative start, managing just a few tracks per workout, he quickly became an RPM convert. The rapid results even impressed his doctor.

So why did indoor cycling make the difference? Philip believes an exceptional Les Mills instructor who really believed in him was key. “Basically she pushed me when I needed to be pushed and helped shape my whole fitness journey.”

He says another key factor was the strong substance to the routine. “It’s a thrilling workout which takes you on a journey.”

Group fitness can seem intimidating if you are starting from scratch, but the beauty of RPM is that you set your own pace. This means a physically inactive person can join a workout that challenges even the fittest gym goers. Being able to join for a few tracks and gradually increase the length of your workout means you are in control from the start.

Indoor cycling is low impact and kind on your joints. If you are physically inactive it is a great way to get started without putting sudden pressure on your limbs – particularly those tricky knee and hip joints. The group atmosphere provides additional motivation and there is a trained instructor on hand to keep you on track.

If you think it sounds like one of those hard to believe stories that won’t happen for you, then Philip can relate. He was sceptical until he joined that first class and got moving.