HOW GUT BACTERIA COULD BE JUST WHAT THE DOCTOR ORDERED

Unique research into the obesity-reducing potential of transferring healthy gut bacteria from one person to another could also be the beginning of an exciting new era in combating many other diseases and conditions. 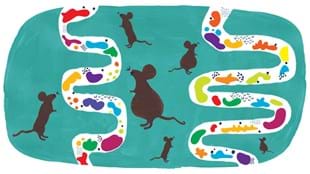 The first trial in the world to study the role of gut bacteria in causing and reducing obesity in teenagers is taking place at a research institute in Auckland, New Zealand. Eighty participants will swallow capsules containing gut bacteria extracted from the feces of four lean donors. The aim is to repopulate the gut microbiome of the subjects, and potentially reverse their obesity.

At the same time, a range of other outcomes are being monitored, including mood, behavior, appetite, diabetes risk, blood pressure, and inflammation. We spoke to lead researcher Professor Wayne Cutfield about the design of the study and why the long term results could have implications well beyond the treatment of obesity.

Margo White: How do we accurately describe the process you are developing?

Wayne Cutfield: I use the term “gut microbiome transfer” (GMT) because it more accurately characterizes what we’re doing. People refer to “poo pills”, but that has the connotation of a desiccated poo. These are capsules of bacteria, so “poo pill” is not even vaguely descriptively correct. We call them “gut bug capsules”.

You still hear the term “fecal transplants” too, so how accurate is that?

When you talk about fecal transplants, it implies that you’re transferring a whole stool. But you’re really just transferring the bacteria to recipients. A bowel motion consists of half bugs and half waste. In the older, less refined studies, in which gut bacteria were used to treat C difficile (a severe condition, that causes terrible diarrhea, and can kill you) they removed most of the waste, blended the bacteria and poured them into the bowel – either bottom up or top down. This remains the approach used today ... If you give healthy gut bacteria to someone with chronic C difficile you can cure them almost 90 percent of the time.

But that isn’t the delivery method you’re using in the obesity study, is it?

If you’re treating something as serious and dramatic as C difficile, that method might be acceptable and effective, but when you’re treating something less life threatening, that method is much less palatable. We’ve shown that we can take a fresh stool, remove the bacteria, clean them up, put them inside one capsule, and then inside a second capsule. The process is completed within one hour. When the capsule is swallowed the bacteria are released, in the bowel, beyond the stomach, right where they need to be.

So far, has most of the evidence for gut microbiome transfer (GMT) to treat obesity comes from mice rather than humans?

It is a fairly new area, not more than a decade old. Mice provide a simple model, and they have a few quirky behaviors. For example, they eat each other’s poo, which is something humans don’t do. Also, if you swallow bacteria, your stomach acid will destroy a lot of them. Mice stomachs aren’t so acidic, so there are several benefits to using mice to study this.

It’s a big leap from mice to humans though ...

There’s also at least one accidental case report in which a woman was being treated for C difficile, with the gut bacteria from her daughter who at the time was rapidly putting on weight. The mother got better, but also put on a lot of weight after the transplant, a huge amount of weight. She’d been slim all her life. That’s the reverse of what we’re seeking – which is using GMT to help people lose weight – but it suggests that human-to-human you can change body type with gut bacteria.

How do you go from suggestive evidence like that to more conclusive findings?

In terms of using gut bacteria to treat obesity, all the evidence is suggestive. But all the circumstantial evidence suggests it could be effective, and we won’t know until we do an actual intervention study, which is what we’re doing. It might work dramatically, it might work a bit, and it might not work at all. But we want to conduct a study that clearly answers the question, and our study is designed in a rigorous and robust and very intricate way.

Tell us more about the trial

An association doesn’t prove that the gut bacteria are causing those conditions, but we won’t know until we’ve done the intervention studies. If you asked me how many treatment studies in humans have been done that clearly show that gut bacteria can cure or fix something, the answer is none, except for C difficile. So we’re at a scientific tipping point – there’s a weight of circumstantial evidence that now really needs to be addressed by well-conducted intervention studies.

What does it take to be a donor in your study?

It’s a pretty rigorous selection process. We call them “super donors”, because we want the best possible bacteria from lean subjects, who need to meet certain body composition criteria, who exercise, who have healthy diets, who are completely free of all conditions and aren’t on any treatment. About ten percent of potential donors have met our criteria.

And you’re also profiling the composition of the super donors’ gut bacteria?

Well, if I said to you, “I’ve got an amazing treatment here for you in this capsule, and it could be very effective”, you’d want to know what was in that pill. So we’re actually characterizing the gut bacteria of the donors, because we think that’s critical – whether there are certain bacteria, or distributions of bacteria, that are more effective. Ultimately that will help refine treatment.

You’re dealing with trillions of bacteria?

Yes, and we think the diversity of gut bacteria is key. If you think about the analogy of a rainforest compared to a pine forest, a rainforest is much more resilient if it gets hit by terrible environmental conditions. It’s important for us to characterize the bacteria.

If this treatment works for obesity where is this research heading?

We don’t want to jump too far ahead and assume an outcome that we haven’t yet finished testing. However, if it was to be an effective treatment for obese teenagers we would firstly determine whether we could identify the best mix of bacteria and then look to culture those to place in capsules rather than rely on donor stool. Such an approach would enable us to scale production. Secondly, we would test other conditions that could be improved by GMT such as diabetes, inflammatory bowel disease, allergic diseases and then possibly mental health disorders. If our study works, our team will be busy for years!

Wayne Cutfield is Professor of Paediatric Endocrinology at the Liggins Institute at the University of Auckland, and leads clinical research into childhood obesity and the role of the gut microbiome in health and disease.