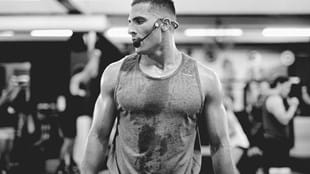 DR VYBARR CREGAN-REID: We have different kinds of sweat that is produced on different parts of our bodies. It’s mainly our thermoregulation technology, which allows us to stay cool on a hot day. It also creates our scent, our body odor. Everybody knows about the smelly parts, the groin and armpits, but that involves different types of sweat glands, to create a specific scent that is as unique as our DNA. But the main function of most of our sweat glands is thermoregulation.

Sweat is about as essential to being human as having a brain is, and has played a key role in the evolutionary success of our species. We think of it as a sort of throwback to our previous animal selves, but the reason we’re at the top of food chain is partly due to the fact we sweat, but also the way we sweat, on particular parts of our body.

In certain environments, like the gym, it’s a badge of honor, but taboo in other situations. In job interviews it’s rather awkward when someone goes to shake your hand and you have sweaty palms.

The reason you have sweaty palms is you’re having a fight or flight response. If you have sweaty palms you can run and climb up a tree more easily, because sweaty palms gives you extra grip to hold onto things. But it’s an evolutionary throwback, something that happens when adrenaline is released. So sweaty palms and feet might have made sense, because it would enable you to grip better if you were running or climbing.