We caught up with Les Mills Trainer Phil

Phil started work on the gym floor but his love of dance and martial arts led him to Les Mills. He’s now a Les Mills UK Regional Training Coordinator, Trainer, and Presenter. 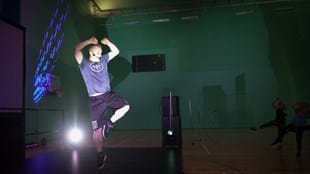 Tell us about your career in fitness so far

Throughout my childhood I practiced martial arts and dance. I was always interested in fitness so when I was old enough I interviewed for a job in a hotel health club.

A video of BODYCOMBAT™ 1 came into the gym one day and as I’d grown up learning and teaching martial arts it caught my eye. I thought that it looked similar to sessions I’d taught (but way more professional) and decided that I was going to become an Instructor.

That was in 2001 and I joined the Trainer team in 2005. I’ve had the honour of presenting on several Les Mills Releases and writing educational content for both BODYJAM™ and BODYCOMBAT™. Now, I work as a Regional Training Coordinator alongside my Trainer and Presenter role.

You’re known for your awesome dancing skills. Did you dance before Les Mills?

I trained in Disco, Rock n Roll, and Latin but as I got older I taught myself by watching MTV videos. I began to take part in lots of dance classes and went to auditions for shows. Teaching and participating in BODYJAM actually helped me to be a better dancer as well.

If you weren’t a fitness instructor, you would be….

A Ju-Jitsu instructor or a film critic.

What’s your ideal day off?

Taking Simba my Dog on a huge walk, then spending time with my family and watching a good film.

What’s the highlight of your career?

I’ve been very fortunate to have had the opportunity to travel internationally, teach at big events such as Les Mills Live, and film the Les Mills Releases. But the highlight for me is being a part of the journey of Instructors that I’ve helped develop. Some of them have even become Trainers themselves.

If you want to hear more from Philip follow him @philip__harrison