With manufacturers and retailers finally waking up to the plastic pollution crisis, what can we do right now as individuals to keep up the pressure? 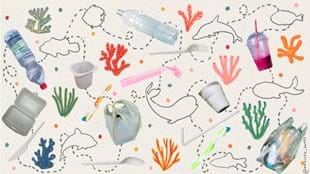 Assuming you’re not living under a rock, you’ll be aware that the planet is suffocating in plastic. It happened so fast; plastic has only been around for 65 years or so, but it’s estimated we’ve produced 8.3 billion tons of it in that time. By weight, that’s the equivalent of 25,000 Empire State buildings or one billion elephants.

Worse could be yet to come; plastic production is predicted to double again in the next 20 years, and a report from the World Economic Forum warned there’ll be more plastic than fish in the world’s oceans by weight by 2050.

The better news is that people are sick of plastic, angry about the plastic, and a long overdue plastic backlash has begun. This could partly be thanks to David Attenborough’s BBC series, Blue Planet 2, which featured albatrosses unwittingly feeding their chicks plastic, and a pilot whale mother nursing its dead calf, poisoned by plastic. Also, China has banned the import of low-grade recyclable waste, so countries are having to face up to the waste in their own backyard, rather than shipping it for some other country to take care of.

Companies seem to be waking up to their responsibilities too, or at least recognizing that all this plastic is bad for the brand. Getting rid of the plastic straws (which can’t be recycled) is hardly going to save the planet, but it’s a start. Starbucks has announced it will replace them with “adult sippy cup” lids, Ikea says it will phase out all single-use plastic products in its stores and restaurants by 2020, including plastic straws, plates and garbage bags, McDonald’s has started using paper straws, and Seattle has banned plastic straws altogether with its “Strawless in Seattle” campaign.

More than 25 countries around the globe now either ban or tax single-use plastic bags, the UK-based Iceland supermarket chain is working to transition all its own label products to being plastic-free by 2023, and a number of companies responsible for 80 percent of the plastic packaging produced in the UK have signed up to the Plastics Pact, pledging to make plastic reusable or compostable, and eliminate single use packaging, by 2025.

“One single water bottle will remain on the planet in some form for a minimum of 450 years.”

One way to address this ever-escalating problem is recycling, but only about 9 percent of plastic waste is recycled, and 12 percent is incinerated, while the rest ends up in landfill or the sea. We clearly need better and more consistent recycling systems, but recycling is never going to be a fix-all solution; plastic can’t be recycled infinitely, and after a handful of times it will be end up in landfill. As stated in a recent column in the Independent, “One single water bottle will remain on the planet in some form for a minimum of 450 years.”

Bio-plastics, which are derived from plants and actually compostable, are also getting a lot of scientific attention. The problem with bio-plastics is that they have typically been made from corn, sugarcane, vegetable oil and starch, which would mean diverting resources (fertilizers, water, land) used to make food, to make plastics.

Many researchers are now turning to seaweed as a more sustainable raw material, because it grows fast, without fertilizers or land. Indonesia, one of the world’s largest seaweed producers, is leading the charge in this area, with Indonesian startup Evoware developing a seaweed-based jelly cup, and now expanding into other types of packaging such as dissolvable sachets for coffee or seasonings. Work still needs to be done to find ways to make seaweed-based plastics as versatile and economically competitive as oil-based plastics.

Many argue that solving the plastic crisis requires shifting from a linear (buy, use, dispose) economy to a circular (buy, use, re-use, recycle or repurpose) economy. This would also mean designing products in ways that prioritize what happens to them at the end of their life, and developing social policies to support the infrastructure to dispose of them in an efficient and sustainable way.

What can we all do in the interim? We have the people power. Not so long ago supermarkets said they used all that plastic packaging because consumers demanded it. So by that logic, consumers could (and should) demand supermarkets use less of it; when a carrier bag surcharge was introduced in the UK in 2015, carrier bag use dropped by more than 80 percent.

WHAT CAN WE DO RIGHT NOW?