Coming back from COVID: How are clubs faring?

How have clubs globally been impacted by COVID-19? And what steps are they taking to fight back to full fitness? A new 84-page report from ClubIntel has the answers – we’ve drilled into the detail to bring you seven key insights.

“Only in concert can we all prevail, and only by thinking anew and acting anew will we successfully navigate this new era of fitness.”

So reads the apt quote that introduces the latest ClubIntel report into the fitness industry’s response to COVID-19. As the curtains close in on the worst year fitness operators have ever faced, this new report details how clubs have been impacted by COVID-19 enforced closures and explore what measures are being taken to rebuild their businesses.

Based on responses from operators who represent 7,300 health and fitness facilities around the globe, the report sheds new light on the damage done to clubs around the world by COVID-19 up to September 2020 and offers encouraging insights into the extent of their recovery. Here are seven key takeouts:

1. Clubs are mounting a comeback...

While 70 percent of clubs globally were forced to close during the first wave of the pandemic, the majority have since reopened and are gradually welcoming back their members. The ClubIntel report finds that 87.5 percent of clubs had reopened by September, with the average club seeing 69 percent of its members return so far, while just 10 percent of operators (mainly based in Japan and Europe) had welcomed back 100 percent of members. 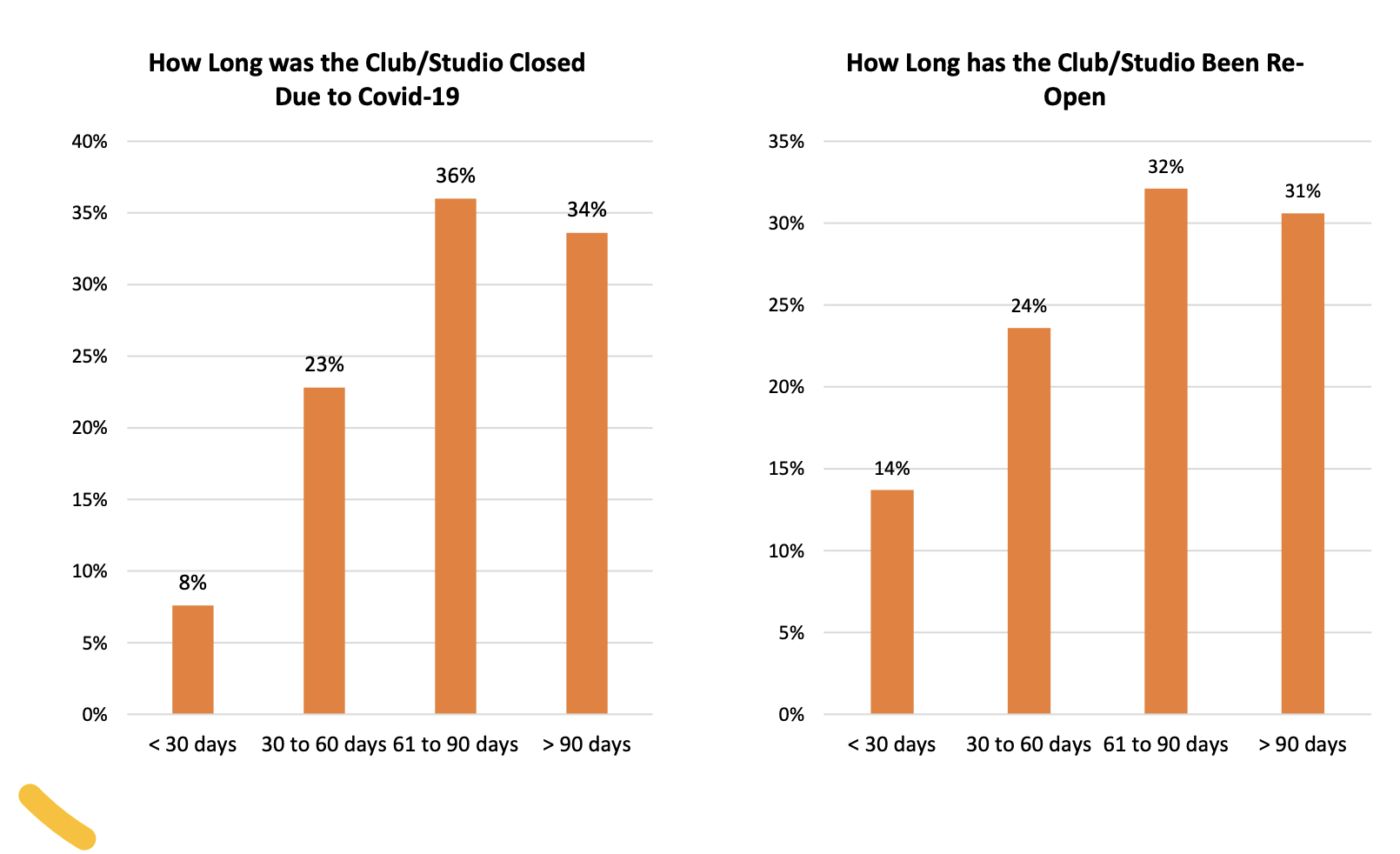 The report predicts most operators can expect membership levels to range from 50 to 80 percent of pre-closure levels by the end of 2020, with fewer than one in five clubs likely to be back at full capacity. Recent ClubIntel research looking at US club members concluded that member usage prior to lockdown is a powerful predictor of the likelihood that member will return. 52 percent of members who visited their facility on average 12 times or more a month indicated they were very likely to return, compared to only 37 percent of those who use their facility 8 to 12 times a month and 22 percent who visit once per month or less.

“Not everyone will come back right away, so it’s important to be proactive across your club’s comms channels, highlighting that people are back in the gym and emphasizing the message that it feels good to be back working out again,” advises IHRSA Acting Chair and Styles Studios Fitness MD Carrie Kepple.

“It’s also worth studying the percentage of your members who have been with you less than a year, as you might need to work harder to reconnect with the newer members who haven’t built that solid bond with your club yet. Think hard about what reasons you’re giving for them to come back to your club over another. These are conversations that are best had over the phone (or even face-to-face) if your team has the capacity. And of course, be sure to continue nurturing and building bonds with longer-term members as well.”

The research was conducted before second waves of COVID began to affect club operations – particularly in Europe – but major difficulties were already evident. Approximately 13 percent of fitness facilities remained closed at the start of September – nearly six months after the start of lockdown – while a further 14 percent of clubs had only just reopened in the previous month. With cashflow coming under serious strain after such long closures, the report predicts that over 80 percent of those clubs yet to open will close permanently.

Meanwhile, the average club saw 21 percent of its members cancel during lockdown, although a quarter of clubs reported cancellation levels between 26 and 50 percent. Such attrition, compounded by the fact that many clubs had to freeze membership payments during lockdown, is taking a predictable toll on revenues, with most operators expected to end 2020 in the red. 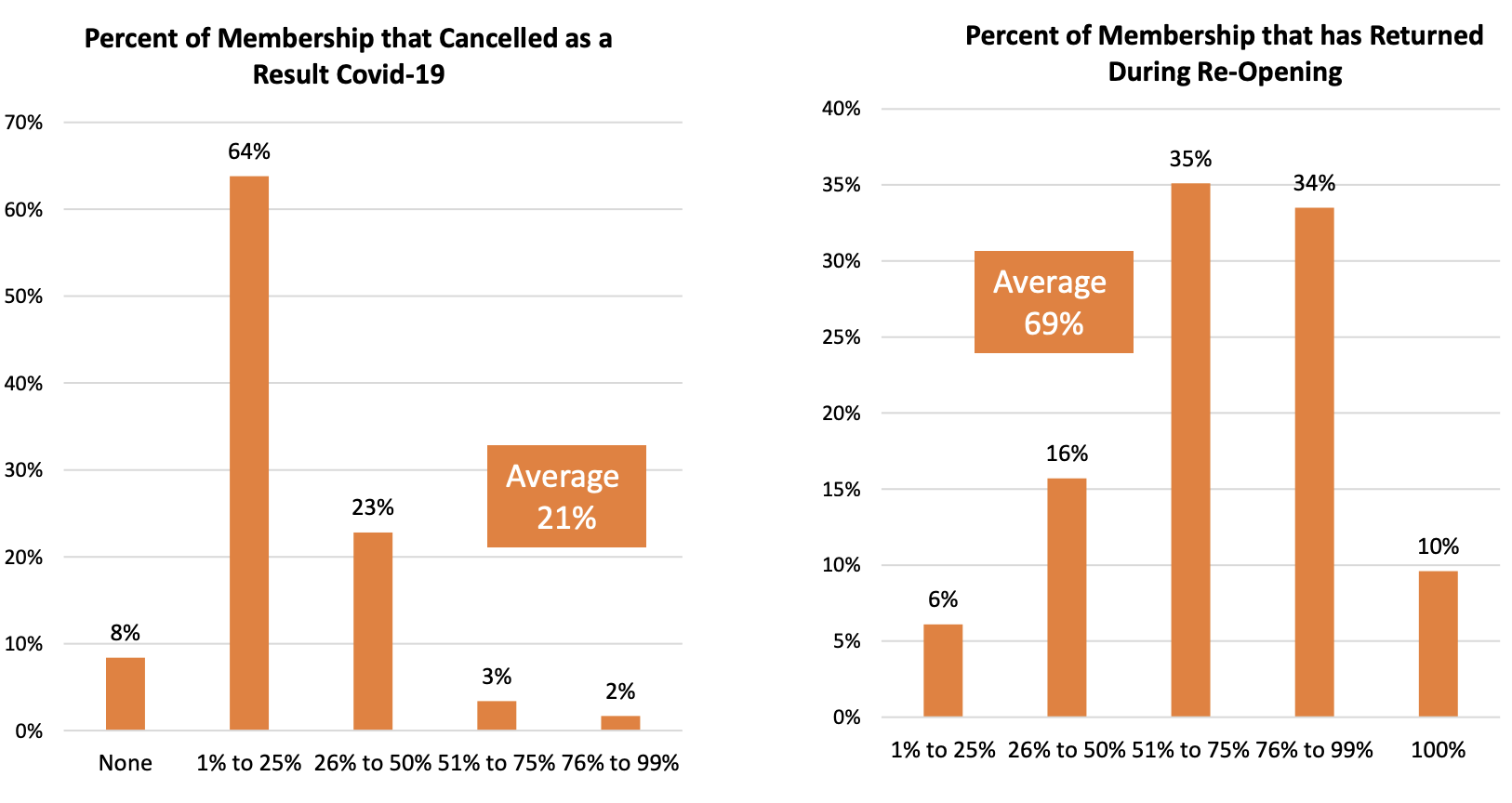 The average club expects revenue for the calendar year of 2020 to be just 63 percent of 2019’s takings, while a quarter of clubs said this year’s revenue would be between 26 and 50 percent of that amount. The knock-on effect of fewer members and lower revenues has inevitably affected jobs in the sector, with clubs typically operating with 25 percent less staff than pre-COVID. This is predicted to continue into the new year as operators cut costs to mitigate the projected revenue shortfalls.

3. Segmentation is a significant factor in club recovery

At a time when government support for club operators and Instructors is being hotly debated in many markets, the report offers intriguing insights into which clubs might need it most.

The report doesn’t delve deeper into the reasons for such differences, although it’s reasonable to assume that membership models and demographics are significant factors. Private clubs tend to command high joining fees, meaning their attrition rates are consistently very low as members are heavily invested in their clubs. And these members are typically affluent, making them better-placed to weather the economic storm of COVID without having to cancel gym memberships and other expenditures compared to lower socioeconomic groups, who have been disproportionately affected by the economic impact of COVID.

4. ‘Digital Darwinism’ comes to the fore

One of the prominent themes in the report is the importance of adopting an agile mindset to fully capitalize on the opportunities that lie ahead post-COVID, particularly when it comes to technology.

Previous ClubIntel reports have examined the impact on clubs of ‘Digital Darwinism’ – the term coined to describe the current zeitgeist where technology and society are evolving faster than businesses can naturally adapt – warning that clubs which fail to keep pace will be at risk of extinction.

With the likes of Apple, Google and Amazon all making moves in the fitness space, the case studies featured in the report suggest clubs that can bridge the gap between the digital and physical world to offer members an integrated fitness experience will be best-placed to thrive in the future. What the pandemic has demonstrated so far is just how quickly clubs can adapt when they need to.

Accordingly, offering digital workout content (dubbed ‘Video On Demand’ in the report) has rapidly become standard practice for clubs, with 72 percent of operators now offering on demand and livestream group workouts for members (up from just 25 percent in 2019), either through branded club apps or by teaming up with a partner. ClubIntel reported recently that LES MILLS™ On Demand (LMOD) was the most popular third-party option during lockdown, with 31 percent of clubs choosing the platform to keep their members active and engaged, along with Les Mills livestream options. 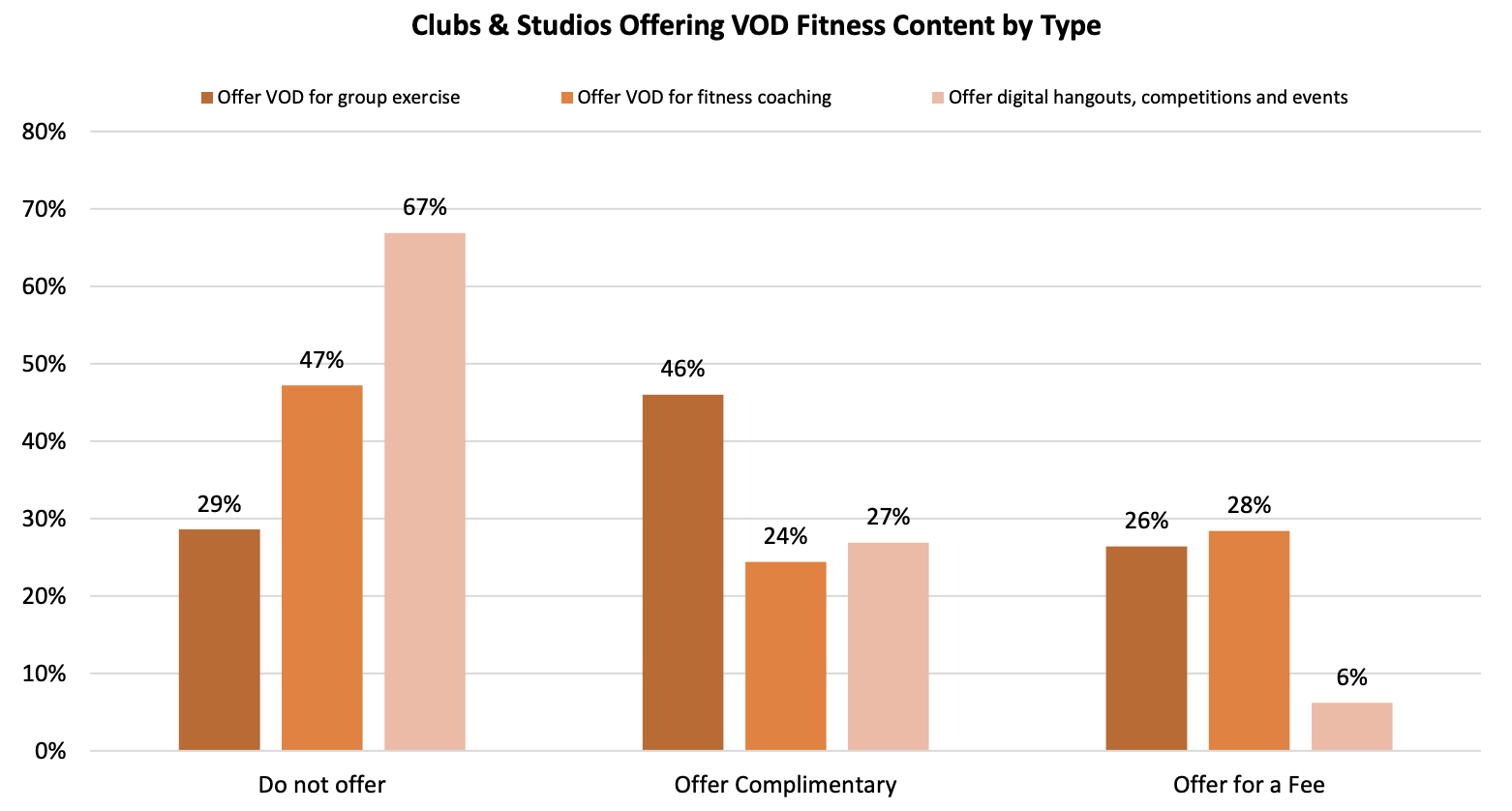 The authors note that offering digital workouts to attract and retain members has quickly become a “necessity for fitness operators” with the main question now being how they incorporate this into their existing membership models.

“The new dilemma with respect to Video On Demand is ‘Should we monetize it or offer it as a value-add?’” the report notes. “How operators answer may depend on two factors. First, where they stand financially, and second, how they position their brand going forward.”

5. But digital engagement remains an untapped opportunity for many

Although the majority of clubs are starting to get to grips with digital solutions for group fitness, the report finds that other areas of the club are still lagging.

Just 52 percent of clubs are incorporating digital solutions to support fitness instruction, coaching and personal training. Meanwhile, only 29 to 45 percent of clubs globally are harnessing digital engagement programs such as hangouts, events, or competitions to provide members with an added sense of community. Australian/New Zealand (42 percent) and US operators (45 percent) are most likely to offer this type of service to members, either for a fee or as a free member add-on.

In terms of segment, the report notes that fitness studios appear to be the only facility business segment seriously leveraging digital experiences beyond group exercise and fitness instruction to engage members. 45 percent of fitness studios offer these types of experiences, compared to 30 percent or less of for-profit facilities, non-profits, and private clubs.

Despite being a truly global pandemic, it seems the impact of COVID on club membership, revenue and staff rehires differs vastly by region. Asia – Japan specifically – and Australasia appears best positioned to prevail, in some instances thrive, over the remainder of 2020. While not performing as well as these regions, US and European operators are also tipped to fare well for the rest of 2020, while the report suggests clubs in Canada may be hardest-pressed to get back to full fitness in 2020.

The data shows Japan has the highest percentage of clubs (65 percent) already back to pre-COVID membership levels, followed by Australia/New Zealand (62 percent), while 76 percent of operators across Asia as a whole have seen more than three-quarters of their members return.

Despite Japan and Canada being at the opposite end of the table in terms of 2020 prospects, the two countries share one commonality: both lag significantly behind the rest of the world in terms of offering digital solutions for group workouts and fitness instruction.

Reflecting the contrasting approaches to tackling COVID-19 demonstrated by governments around the world, the report found significant divergence in terms of hygiene and safety measures deployed by clubs to lessen the spread of COVID.

For example, less than 70 percent of facilities (and under 40 percent for some practices) had implemented safety measures such as temperature checks on entry to the club, mandatory wearing of facemasks among members and upgrades to their HVAC (heating, ventilation, and air-conditioning) systems.

The report notes the approach of operators reflect the regional health outcomes and public policy toward COVID-19, adding that those “who are doing all these things have a competitive advantage when it comes to telling a compelling story to gain consumer trust.”

Despite many negative articles linked to gyms at the start of the pandemic (many based on the misconception that COVID can be transmitted through sweat), we’ve seen increasing numbers of positive stories linked to gyms in recent weeks, offering hope that public perceptions are improving.

In New Zealand, the Les Mills Takapuna club won plaudits for its safety measures after zero in-club transmissions were recorded when an infected member attended 3 group exercise classes in 18 hours, coming into close contact with 86 members in the process. Meanwhile, in several parts of Europe gyms have been exempted from lockdowns in recognition of the extremely low transmission rates in these facilities and the significant physical and mental health benefits they bring to the communities they serve.

READY TO DOUBLE DOWN ON DIGITAL FITNESS?