“DANCE WAS THE FIRST THING I WAS EVER REALLY GOOD AT”

Gandalf Archer Mills invites us into his studio. 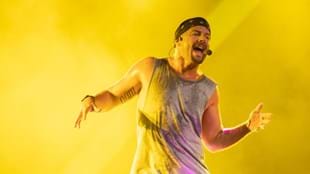 SARAH SHORTT: What is your process for putting a BODYJAM™ release together?

GANDALF ARCHER MILLS: I start with the music – I’ll get 10 songs and put them into an order in Logic on my Mac that I think works really well. I repeatedly listen to the songs that I think are going to go at the end of the block – that the routine is going to finish with – and I choreograph what I think is going to work listening to those last two songs.

I’ll then go back to the first song and start to break it down, and during this process I’ll change most of the choreography again. I might change more than half of it completely so that the choreography matches the first, second, third song and so on… culminating in the end product that I was going for at the start with those last two songs.

To do one block from start to finish takes me two to three weeks, and BODYJAM has two big blocks plus all of the stand-alone tracks.

Are you pretty much choreographing for the whole three months before you film?

I teach a freestyle dance class once a week and for that class I’m choreographing all of the time. I use that freestyle class to experiment, make up crazy stuff and explore, whilst the music for BODYJAM is getting licensed.

When we’re six weeks out from filming, that’s when I’ll put the music down and start choreographing BODYJAM. There’s nothing worse than having a piece of choreography that’s amazing and then a song gets denied – because then you’ve got to fix it. And there’s numerous options to fix it but I tend to take that song out and put a different song in.

How did you fall in love with dance?

The story goes like this: when my brother and my sister were teenagers, they joined this Auckland based performance group that taught them dance and singing and a bit of acting. When I was 10, my sister came home with one of the new timetables from the dance school and there was a class called street funk and I was like, I wanna try street funk!

I went to the class and it was the first thing I was ever good at, and I was good at it from the very beginning, you know? I knew it and the teacher knew it, and there were people in the class who were way older than me – 16 or 17 – and I was keeping up with those kids after two or three weeks.

There were lots of rib shifts and running men and Young MC and Technotronic and C&C Music Factory and there was a lot of new music in my life all of a sudden. Then some radio stations popped up in Auckland that were playing hip hop and I really got into it but no one else in my school or in my suburb liked hip hop – it was just me. Then in like 2000, when hip hop blew up worldwide, I was like – see?! I told you suckers! So that’s how I fell in love with dance. Rib shifts.

How do you stay as creative with every single release?

Music. Because music is always changing and artists always creating some new tempo, some new sound or rhythm… some combination of this dance style from Cuba in the 60s mixed with Melbourne bounce music. There’s so much craziness going on in the music world all of the time and so much exploration of new ideas that if I just keep listening to interesting music I will always find somewhere new to go.

That’s the main way I stay creative. But I’m really conscious of my headspace and workload and I can choreograph well under a bit of pressure, but under a lot of pressure I struggle, so I have to schedule my process. I’m used to hitting barriers and then knowing how to get through the barrier to achieve the end product. And it could be a barrier that just happens over one day or it could be a barrier that happens through the whole quarter – having babies is a big life thing to get through and still make the product!

After all these years, I know how I like to work and how I work well, and I suppose that comes with experience. Being honest with myself. I learned a long time ago to go – no, that choreography is rubbish, try harder. For a long time I didn’t know that. For a long time I would just make something up and get it to a stage that I thought was decent… and then I started caring more about my work and that’s when I started to love the challenge of making up something and then figuring out how to keep improving it.

How do you plan to continue to make BODYJAM relevant in an industry that has so much competition from programs like Zumba and U-Jam?

I think BODYJAM is very VERY different from Zumba and U-Jam and once members go to a class and have done it once or twice, they feel the difference. I don’t try to design BODYJAM for everyone – I try to make up a dance class for people who like to dance, and so there’s a bit more coordination involved in BODYJAM that makes it slightly more complex than SH’BAM™ or Zumba.

I was given the freedom by Les Mills a long time ago to make up a dance class that wasn’t trying to be anything else and that’s what I’ve always done – I’ve always tried to make up dance choreography that feels amazing. Beyond the choreography and music, BODYJAM needs a great dance Instructor who’s really committed to technique and getting better as a dancer. As soon as you get the right Instructor who’s got that goal of teaching great dance – and we’ve seen it over and over again – BODYJAM does really well, you build a room full of people with so much passion for the program that they’re super excited for every new class and every new release.

If you had all the BODYJAM Instructors in the world in one room, what you say to them?

The best way to achieve longevity and enjoy yourself on stage week after week, year after year, is to be present and connected with who’s in front of you. Because they’re there for you and you’re there for them, and it’s a reciprocal thing. Acknowledging this fact and teaching to it just makes it so much more fun and easy and inspirational. And your members can 100 per cent see through you if you’re pretending.

What is your all-time favorite dance move?

People have a perception that dance is all about moves but it’s not about that at all – dance, for me, is about feel and your body’s connection to the song you’re listening to. And so I’ve never really got on board with the idea of dance moves. In saying that, I have a lot of moves that I repeat through releases over and over ‘cause they work so well. But I rarely give them names ‘cause they just feel like choreography to me.

If you could only do once dance style for the rest of your life, what would it be?

If I was in some kind of dance prison or on a deserted dance island? You’ve got to give me the music to go with it and I’m allowed to listen to all of the music that comes out forever with that dance style, right? That’s a hard one. House would be my favorite dance feel to do for the rest of my life but it would get a bit repetitive after 20 years, whereas if I chose hip hop there’d be much broader sounds coming out and sent to me at my dance prison island... OK, it would be hip hop from a music perspective – if the rules were really quite set – but from a pure dance perspective, I would choose House.

What training do you do outside of teaching?

Outside of choreographing BODYJAM (which is a LOT of dancing) I teach one freestyle class of whatever genre I feel like teaching. I weight train between two to five times a week – lifting heavy weights for six to eight reps – plus a lot of core stability and functional movement. I don’t do a lot of leg training because BODYJAM is so leg heavy – you’re basically in a squat for 55 minutes.

Do you play a game of trying to insert dare words into coaching?

Yeah I do that all the time, everybody does that, that’s the most fun game! I’ve always worked with Instructors where you have to say a very silly word during class. What I really like doing when I teach with other people is spontaneous comedy that the other person doesn’t know is about to happen. When you have people on the spot, who they really are comes out so purely in their reaction.

I love being stupid on stage, it’s my go-to. I say the lamest jokes BUT I say so many of them, that one out of 10 is amazing! I’ll remember that one out of 10… because nobody needs to remember your failures. I do stand-up comedy when I teach. People don’t know that because I only do it a bit on the Masterclass, but come to a live class and it’s basically stand-up fitness.

What is your stand-out most amazing BODYJAM experience?

I’ll never forget BODYJAM 74 at the Grand Pallais with 5000 French people. I think 74 is one of the best releases for the music and styles and simplicity and complexity… and I had 5000 people all doing this new release they’d never seen before and going crazy. When it finished I was completely overwhelmed and full of emotion. I went to the back of the room, found some concrete steps and lay down on one of them and stared at the ceiling of the Grand Pallais for like 20 minutes, needing the space to process what had just happened.

I’ve had lots of amazing filming experiences that didn’t feel like filmings at all, they just felt like normal classes. There was one with Chris Richardson which felt like freestyle teaching for an hour. He was standing in the middle of the stage screaming, “one more?” with his hand in the air and I saw him standing there, threw my body between his legs and went, “one more!” He didn’t know I was there, ‘cause I was right underneath him, and then he took a step back and he fell over. That was a really great filming. 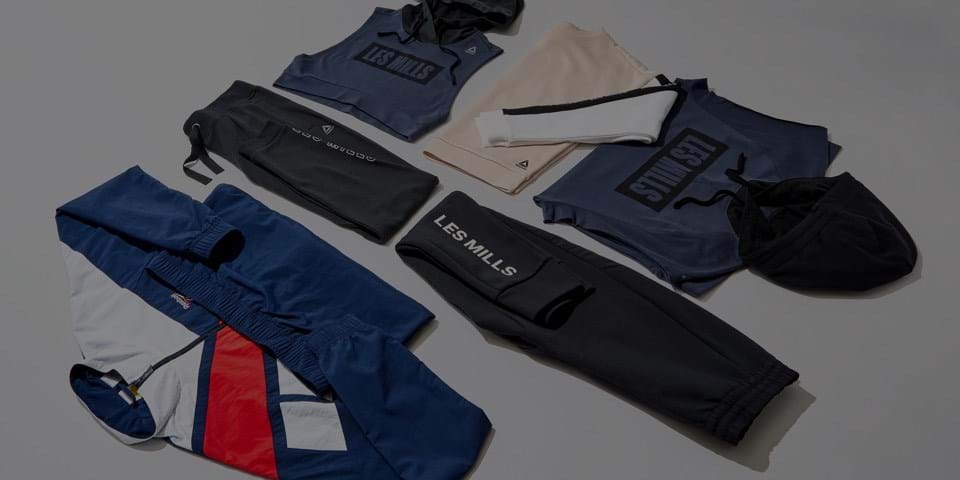 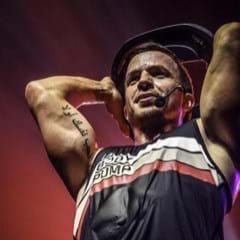 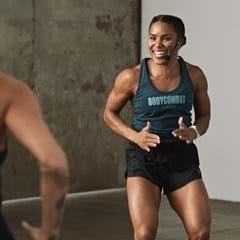 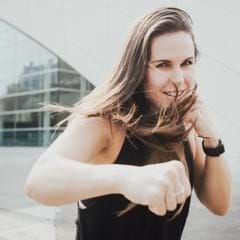 RACHAEL NEWSHAM ON WOMEN IN FITNESS by Rachael Newsham