Les Mills legend Mike McSweeney died in December 2022, aged 64. Those who knew him best share their memories of the trailblazing teacher. 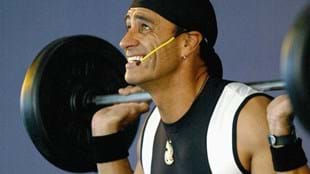 Mac started working for us in our Wellington gym. Prior to that he’d been in the army, and he’d also played squash and rugby. In the late 80s, he moved up to Auckland and that’s where his journey with Les Mills really began.

He was originally a BODYATTACK™ teacher – or Jazzergetics as it was called back then. He wanted to reinvent the program, and along with a few other people, he was instrumental in developing it and renaming it BODYATTACK. In 1990 he really got into BODYSTEP™. In the 80s aerobics had been all about leotards and legwarmers, but step – started by Gin Miller in the US – became the first of the more athletic classes in the global transition that led to BODYPUMP™, Spinning and Tae Bo. Mac would get a couple of hundred people in his BODYSTEP classes in Studio One at the Les Mills Auckland City club.

We launched BODYPUMP in 1990. Mac watched from the sidelines for a couple of years, and then decided he wanted to be involved in it. He saw it as the next evolution of athletic classes. His first appearance on a video was Release 6 or 7. He moved out of BODYSTEP and BODYATTACK and became the head choreographer for BODYPUMP. It was already big in Auckland when Mac took it over, but he was the guy who really took it to the world. We launched it in Bill Robertson’s club in Canberra, Australia in ’95 and he, Emma Barry and Steve Renata went over there and started training Instructors.

If step aerobics was the first big international athletic class, then spinning was really the second. It was invented by Johnny G, a South African guy, in the early 90s. Mac saw the potential early on. He started working on RPM™ around 1996 and led both BODYPUMP and RPM when we took them to the international market in 1996 and 1998.

To my mind, there were three charismatic Instructors back then who really changed the fitness world: Billy Blanks with Tae Bo, Johnny G with spinning, and Mike McSweeney with BODYPUMP.

His influence as a role model really can’t be overstated. Here was this super fit Māori guy in black rugby shorts and a singlet, just absolutely shredded… it really was a game changer. He became a global icon and role model who teachers around the world just fell in love with. He was one of the key factors behind Les Mills’ success internationally. Instructors started dressing like him and he really led a whole new culture in fitness classes.

Mac was a hard man. He didn’t smile much when he taught BODYPUMP but the few times he did – it was the real thing. It absolutely warmed the room up and people loved him. He was a tough guy, super fit, the real deal. There was nothing cheesy or fake or about him.

He could be tough on people he worked with. For international presenters who came over to film with him, he’d really give them a rough ride. If they survived ‘hell week’ they deserved to be on that video! But when he was on the road, he was lovely. A real ambassador.

Mike was one of my closest friends. We had a friendship that endured the test of time, distance and life.

I met Mike back in 1984/85 when he attended my Jazzergetics class. Back then he was a regular member at Wellington LMWOF [Les Mills World of Fitness] Cuba Mall. I’d recently moved from Masterton to attend the New Zealand Drama School and Mike (from memory) was an A-grade squash player who worked a 9 to 5. I'd scored a peak-time Jazzergetics class and Mike was a regular there, smashing himself like we all did!

Eventually, he gave up his 9 to 5 and trained to become an Instructor. Weirdly enough, I and the other ‘senior’ Instructors were part of the mentor team for these newbies. Mike was a natural so it was no surprise to hear, many years later after I'd moved to Sydney and he to Auckland, that Mike had become the man! He was the king of fitness in Auckland.

I travelled back when I could to spend time with Mike and [his wife] Mary. I attended his classes, and they were unbelievable. Full house, 150 – 200 people depending on the program. And he ruled. He was hardcore. Full on. Fit. And never suffered fools, like a comedian dealing with a heckler. People loved him for it, but we knew NOT to be on the end of it. He had a sharp tongue and a short fuse, no doubt. He walked a fine line between humorous and rude. Crossed it often. He called it as he saw it. And made no apologies.

He was a leader. A pied piper for the super fit and the wannabe super fit. And if you weren’t in his gang, that was OK, but harden the f&*% up!!

One day, out of the blue, he called me up. He said the program he’d been working on, ‘PUMP’, was coming to Australia and I needed to be on board. I was, and the rest is history. A history he created, designed, and took to the next level. Mike and Phillip Mills pulled together their ‘A’ team and sent us off around the world to reproduce 'Mike'. His product. His passion. His unapologetic hardness. His cheekiness. His kindness. His leadership. His PUMP. And we changed the world. We were the face of fitness.

Through the years, as the company grew and more programs were rolled out, Mike moved further and further to the backseat, away from Les Mills. And that was ok. He mentored people coming into new programs and always left his mark.

And you'd see all those qualities in one piece of feedback.

If Les Mills was a movie, he was the star. The headline act. The drawcard. The producer, the director and the leading man.

And I’ll miss him.

Because he was my mate. 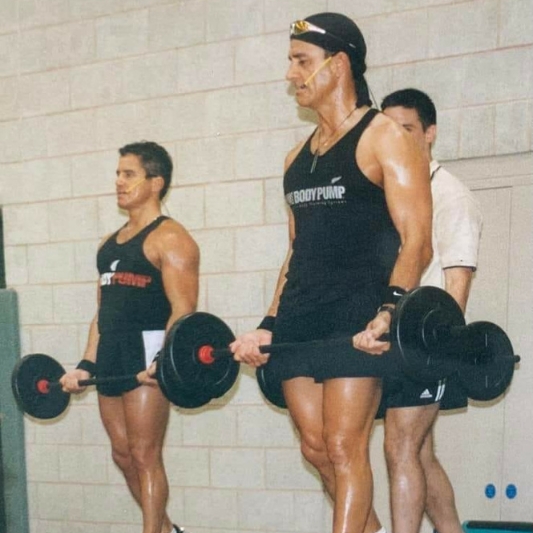 I met Mike for the first time back in 1999. I was in Auckland, New Zealand with my business partner Derk Van ‘t Sant [from HDD in the Netherlands]. Meeting Mike was hilarious… and painful. He gave us a warm welcome at the Les Mills gym in Victoria Street. He was very friendly until we stepped into his BODYPUMP class and then he almost killed us. The man was a monster, very strong! But also very caring. So, somewhat of a paradox. I remember that we flew back to The Netherlands, a 36-hour journey, and stepped out of the plane in Amsterdam not being able to move at all. We were like mummies, with a serious case of DOMS [Delayed Onset Muscle Soreness].

I recall one bus trip to Piha beach [Auckland] with a large group. We were driving through the mountains when this terrible smell spread through the bus. More than half of the group tried to stick their head out of the small windows to survive. Some were vomiting. It appeared that Mike put on a special Chinese sport cream on his legs, to be prepared for the run through the hills. Man oh man, I can still smell it almost 25 years later!

To us, and many in The Netherlands, he was part of the big four: Emma [Barry], Steve [Renata], Pete [Manuel] and Mike. In teaching us BODYPUMP, they showed us a completely new revolutionary workout. Programs such as BODYPUMP and RPM, as well as the entire group fitness system, changed the industry. We owe Mike a huge thank you, with lots of respect. Mike is a hero in our country. We will miss him a lot! RIP Mike! 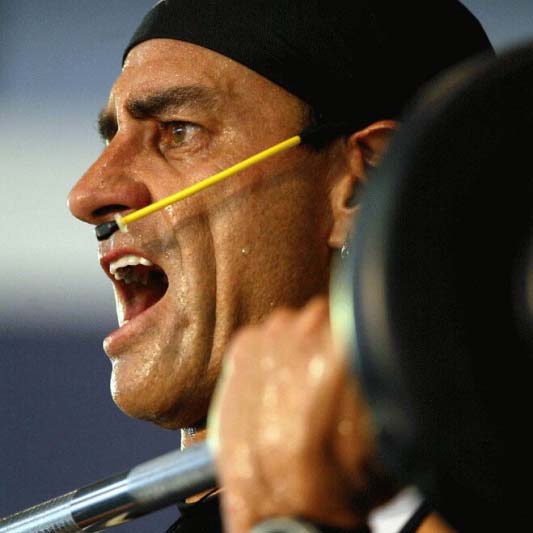 I first met Mike in March 1995 at his Saturday morning BODYPUMP class at Les Mills Victoria Street in Auckland, which had apparently 200 members in class. I was the owner of one of the largest health clubs and swim schools in Australia at the time, and I’d come over to see why Les Mills group fitness was growing when Australian numbers were waning all over the country. We had a systemized business, with the exception of the group fitness department, which was in decline because of the freestyle nature in Australia at that time.

After class, I spoke with Mike. His passion, knowledge and athletic delivery style, along with the Les Mills system, convinced me that BODYPUMP was the solution to our problem in Australia. I saw the potential for it to change the nature and culture of group fitness departments, which in turn would create success for clubs, Instructors and members.

Like many who attended Mike’s BODYPUMP classes, it didn’t take long before I got heckled. In my first-ever class he called me out for having unfashionable socks, apparently too long for his liking. He also had a good laugh when my legs started to wobble like jelly after he suggested that “the Aussie up the back should put more weight on the bar for lunges”.

Mike’s competitiveness and drive, plus his no-nonsense approach, were his unique and standout qualities. I would describe him as having a powerful presence. He was passionate in his pursuit of excellence, while at the same time being a tough, no-nonsense, no-compromise type who wanted to be better than anyone else at what he did. You always knew Mike would turn up and give his best. I think a bit of him has rubbed off one way or another on most of us who had the privilege of working with him. In his own way, he raised the bar of Instructor excellence! 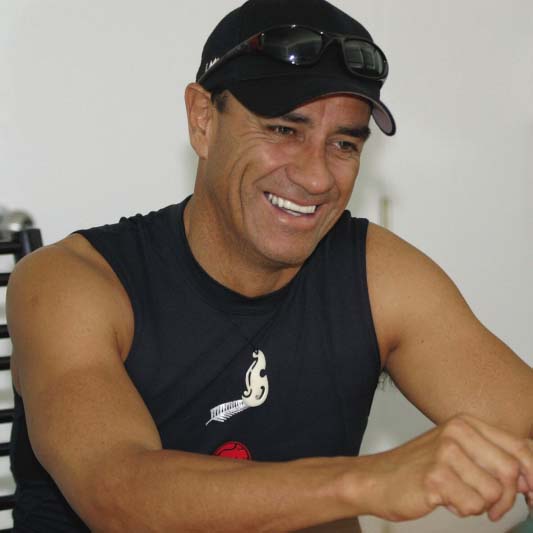 I will always remember Mike McSweeney. He was a real Les Mills Star, more so than any Les Mills Instructor in the world during that era. He remains a legend for me and many of us who started with Les Mills at that time.

I actually saw a video of Mike before I ever met him. On my first introduction to Phillip Mills in 1996, in Italy, he showed me a recording of Mike teaching PUMP. The contrast between him and the usual freestyle Instructors in France at that time was stark; he was so much more athletic and strong.

Mike was a very tough guy, incredibly committed. He wasn’t there to have a laugh – he was there to do the job. He was very focused on what he wanted to achieve. He wasn’t the friendliest guy when you first met him, but he had a heart of gold and was loyal to his friends.

He is the PUMP man forever.

Mike presented, choreographed and educated Trainers, Presenters and Instructors around the world for over a decade, including BODYPUMP 6-58 and RPM 1-25.⁠ He made a huge impact within the Les Mills community and we all owe a huge debt to him. Rest in peace, Mike 🤍 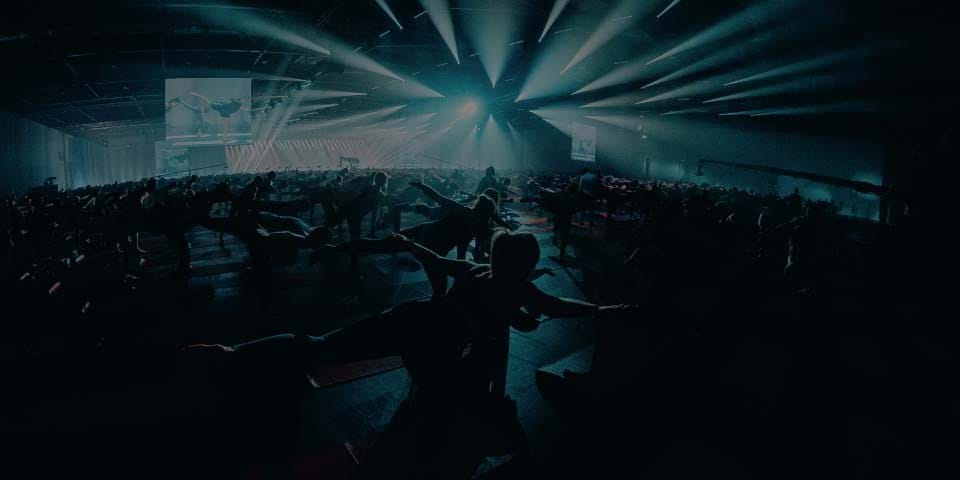 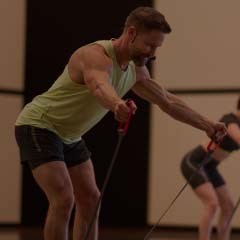 COULD LES MILLS CORE BE THE ANSWER TO LOWER BACK PAIN? by Jak Phillips 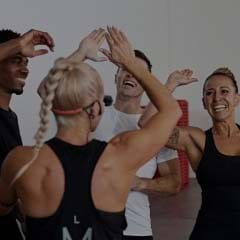 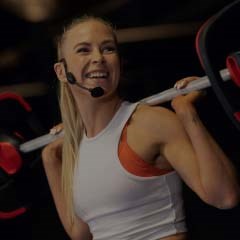