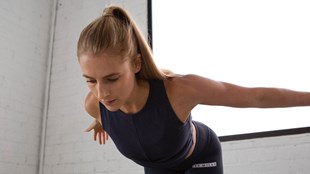 How you felt after the class: Everything hurt so badly. This morning I googled "Should you exercise when your whole body hurts?" and learned all about DOMS. Found my 3-pack of sports bras had arrived upon leaving the house and felt rather excited.

How people react when you tell them about your new regime: A mixture of hysterical laughter (“I wish I’d been a fly on that wall” and “I don’t imagine you to have any coordination whatsoever”) and supportiveness (“I am SO SO impressed with you” text from my best mate and “YES! I’m gonna do it too! I’ve had a gym membership since October and I haven’t been once! What did you wear?” From my manager)

How motivated you feel to go: Surprisingly motivated. I think the key here is that I feel comfortable in the classes; it’s the YMCA, not Barry’s Boot Camp, and everyone is just your average Joe. Yes, there are people who are MUCH fitter than I am, but there are many people who are less fit, people who are overweight, people who dump their kids in the child-sitting area just so they can have an hour to themselves, and it feels human. The gym is a foreign place to me so it’s nice to not feel totally out of place at one.

How it affects your mood: Felt pretty smug after doing my first exercise class in 8 years, which is HILARIOUS when you think about it. At least I realise that.

How you felt before the class: Like I couldn’t be bothered. Had a shower and gave myself a pep talk of “You might be the worst but you might not be… the gym is literally a 20 second walk away and if you don’t go today, you are taking laziness to a whole new level…you’ve told people you’re going and they’ll ask… If you hate if you don’t have to go again…”. At the gym I saw one of the hottest men I’ve seen in Boston so far talking to a little girl outside the studio, and when the doors opened he said “OK! Let’s dance!” and I panicked for a second thinking he was the Instructor, but turned out he was just doing it with his daughter. I stood at the very back of the studio and hoped to go unnoticed, but stupidly raised my hand when the Instructor asked, “Anyone new to class?” – I didn’t think I’d be the only one so felt highly embarrassed in drawing attention to myself.

How you felt during: Surprised I had the stamina to keep up, although my coordination was all off and when everyone was turning to the right I was turning to the left (that was not surprising). Enjoyed the quick 5 minute routines ’cause if I was rubbish at one, it was over quickly and I could start again. Found myself involuntarily shouting “HEY!!” with the rest of the class by the end.

Impressions of the Instructor: A lanky looking, six-foot South American girl. Full of energy, fun, aware that her class is not full of the fittest people on Earth but are there to have fun. Reminds us to go at our own pace, drink water, and keeps energy levels up high by being silly at times.

How you felt after: Sweaty and upbeat. Not like I was gonna die, which was nice. Surprised I enjoyed it as much as I did.

Anyone you meet in class: Didn’t talk to anyone. Around 35 people in the class, all women but two. Ages from 8-70.

What you are scared about: Initially, looking like an idiot. Then I decided I didn’t care and just went with it. After doing the class, I don’t have any fears about doing it again. No one was looking at anyone else and no one seemed to care how they were doing.

If you feel sore afterwards: No ‘if’ about it. Felt sore within an hour of finishing the class, and could barely lift a plate at work the next day [waitressing at a Boston restaurant].

How motivated you feel to go: I’m actually looking forward to the next class and liked getting my heart rate up (it’s been a while).

How it affects your mood: I was in a good mood after class and felt like I’d been productive for an hour before 12pm. That rarely happens (the feeling of being productive before 12pm, not the good mood).

“The gym is a foreign place to me so it’s nice to not feel totally out of place at one.”

How you felt before the class: Ohhh I actually want to go! Only had six-and-a-half hours of sleep as I worked the night before, but when my alarm went off I didn’t turn it off. Proud of that.

How you felt during: How can I be worse than I was last week? The routines are the same and yet my coordination is even worse this week. Maybe it’s ’cause I stand right at the back at the far left so I can’t really see the Instructor… Look to the person on my right for guidance but not helpful at all if she’s a middle-aged Chinese lady doing her own thing. I’m not the worst in the class though; there’s a girl behind me who barely moves at all.

Towards the end I’m pretty sure I’ve pulled a muscle in my right shoulder (probably from trying to correct my coordination for the last hour) and my knees and ankles kind of hurt, no doubt because I’m wearing 10-year-old trainers which no longer have any rubber sole.

How you felt after: Everything hurt immediately. Walked two miles to the store to buy new trainers and also picked up a new workout outfit. Realized I don’t think I have EVER gone into a fitness apparel store to buy clothes for sport. Who am I?

Anyone you meet in class: Didn’t talk to anyone. How does everyone know each other? When did they all start chatting to each other?

If you feel sore afterwards: Oh yes. Within minutes. Had a 30-minute soak in a hot bath at the end of the night and nothing hurt the next day. Yay!

How people react when you tell them about your new regime: I told my old flatmate (who is even more unfit and averse to exercise than I am) and she said “I’m so PROUD of you! Go you! You’ve inspired me, I’m gonna go to yoga on Thursday and sign up for Krav Maga this week”. That’s TWO people who have told me I’ve inspired them to go to the gym. My mother would be so proud.

How motivated you feel to go: I’ve done this class two weeks in a row and plan to go next week. Hope I continue to get Saturday mornings off work so I can keep it up.

How you felt before the class: So I actually set my alarm for 8am to do yoga at 9am, but when I woke up I couldn’t be bothered. My back hurt and I didn’t feel like stretching. Had a coffee. Watched 9am pass and felt guilty for not moving.

But wait! There’s a BollyX class at 10am! Do I want to do that this morning? It’ll probably be really fun and nothing else at home before 11am will be fun… I always enjoy watching the Bollywood dances in So You Think You Can Dance, they always looking like they’re having loads of fun… OK YES! Let’s do it!

How you felt during: The class was all women of all ages, including a few in their 60s. Didn’t look like a BollyX kind of crowd. Then a heavily pregnant girl walked in and said “Morning everyone! This is DANCE!”

What? Did I read the schedule incorrectly? No, I didn’t… I checked before I left. Dammit! I don’t want to do dance again! Can I leave? No, I can’t leave, I’m right at the back at the far right again and everyone will see me. Ok, just do it. Bloody hell. I was really looking forward to BollyX.

Impressions of the Instructor: She was very nice and had a good amount of energy, despite being heavily pregnant. She was very smiley and gave me encouraging nods when I finally got the moves right, but that actually made me feel embarrassed ‘cause I knew it meant she had noticed me totally messing it up.

How it affects your performance at work and in study: I had the day off but had loads of school work to do and was actually very productive. Found myself coming up with loads of creative ideas for lesson planning.

“The Instructor is great! She’s well prepared, obviously loves what she does, and is very respectful to her students.”

How you felt before the class: When did I become the kind of person who sets their alarm for 8am so they can go to the gym? I’ve had 8 hours sleep and need no more though, so I should absolutely get up and go. I’ve always liked Pilates and I think it will be a good start to the day and give me energy.

How you felt during: I’d forgotten how much I like Pilates, and how good it is for strengthening and toning. THIS is the class that will improve my back and shoulder problems and tone my stomach. The time went so quickly I didn’t look at the clock once, and I was actually disappointed when it finished! I was just getting into it!

How you felt after: Taller. Energized.

What you are scared about: I wasn’t scared about anything with this class. That’s the beauty of Pilates. Literally anyone can do it.

If you feel sore afterwards: The next day I felt a little sore but my back felt loads better so I was thrilled!

Yoga with weights, Sunday, 11am

How you felt during: Turns out Yoga with Weights is actually pretty hardcore, with pumping music and a workout that had my bum and thighs burning within about 10 mins.

How you felt after: I really enjoyed this class! I’m quite flexible so was actually one of the better ones in there. However, saying that, I was in a LOT of pain the next day (and the day after). It reminded me of the first time I went back to the gym after 8 years of abstinence, but this time I didn’t mind it so much. This is probably my favorite class that I’ve done, and I really want to make it a regular thing.

Anyone you meet in class: You should know by now I don’t talk to anyone in the classes ;)

Impressions of the Instructor: Oh she’s great! She’s well prepared, obviously loves what she does, and is very respectful to her students.

If you feel sore afterwards: Er, yes, yes I did. Almost everywhere.

How motivated you feel to go: Love this class and will go every week when I’m not at my thesis class (I even told the tutor I loved it!).

What meets your expectations and what is surprising: I’m surprised I like this energetic yoga as much as I do. I’m a huge fan of ‘regular’ yoga just because I find it relaxes and grounds me, so it was nice to discover this kind and recognize how it will build my strength.

After having belonged to a gym for nearly a year now, I recognize that exercise can improve my mood (especially if I’m feeling down or anxious) and really helps my back, which is why I have kept my gym membership going.

Thank you Instructors, for your energy and motivation!

Originally from the UK, Alana Shortt is based in Boston, USA, where she is a high school teacher. She now attends the gym three times a week. 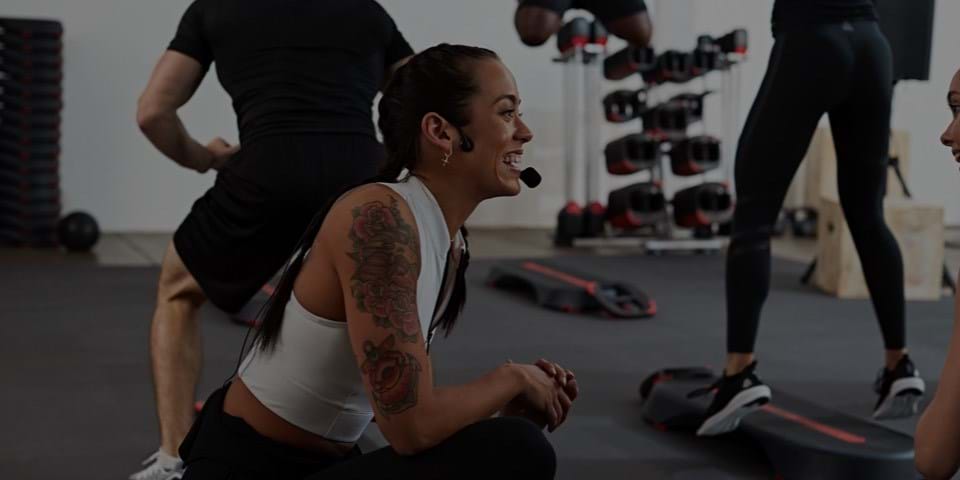 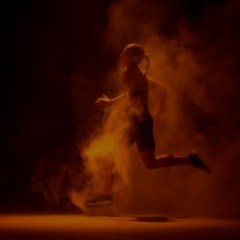 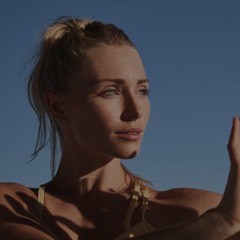 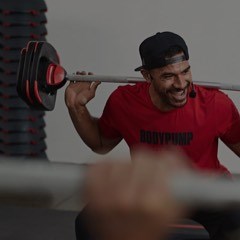