From playing soccer with future superstar Wayne Rooney to becoming a Les Mills Master Trainer, Marcus Benson-Day is still chasing his passion to be the best he can be. 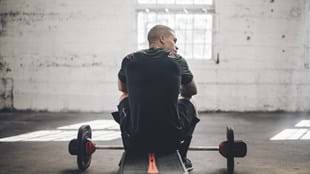 Marcus Benson-Day well remembers the day a new kid turned out to play with his England under-15 squad. Fast, skilful and powerfully built, the newcomer scored within minutes of taking the field. “You could see straight away this guy was something else,” says Marcus.

The kid in question was a young Wayne Rooney, already well on his way to football superstardom with Manchester United and England. Marcus’s career took a different turn, but it’s a measure of the athlete he is that he was playing in that league at such a young age.

In the end a combination of feeling too much pressure from his father, a bad relationship with his club coach, and a loss of confidence saw Marcus quit serious football in his late teens. “It was definitely a hard thing to go through,” he admits. “Seeing your mates make it, having to accept that you weren’t going to, it was tough.”

At the same time, Marcus was completing a sports science diploma and studying personal training. One thing led to another and soon he was working in the fitness industry and rediscovering his passion for things physical. When a new gym opened near his home he was intrigued by the LES MILLS group fitness classes on offer.

“Becoming a trainer re-ignited things for me,” he says. “It re-built my confidence. I’m actually quite a shy person, but teaching a class brings me out of myself and motivates me to deliver the best class possible.”

The best thing about being a trainer, says Marcus, is helping people mentally as well as physically. “It’s powerful and very rewarding watching someone’s confidence grow in themselves and their abilities. People can do much more than they think they can.”

Looking back, he can see definite similarities between teaching a great group fitness class and playing a big football match. “You get to be a role model, you get to perform in front of lots of people, you have to have the highest levels of fitness. Both give me that raw feeling of passion for something I love.”